On May 11 and 12, the conference takes place at Palazzo Ardinghelli and is organized in collaboration with the University of L’Aquila
curated by Giuseppe Di Natale with the participation of Massimo Fusillo

L’Aquila, May 5, 2022 – On May 11 and 12, 2022, in the Sala della Aviary of the MAXXI L’Aquila, it comes back to live the intuition of Enrico Crispolti who transformed L’Aquila in the center of contemporary art during the 60s, entering in direct competition with the big capitals through four editions of “Alternative Attuali” and proposing an innovative idea of exhibition.

The two days of study will offer an important opportunity to retrace the four editions of the exhibition “Alternative Attuali” organized by Enrico Crispolti – one of the most authoritative art historians in Italy and curator in 1976 of the Italian section at the Venice Biennale – at the Spanish Fort of ‘Aquila in 1962, 1963, 1965 and 1968. In these occasions, the capital of Abruzzo became an important point of reference for the national artistic panorama. This was, in fact, the debut of an alternative concept of exhibition compared to those in vogue after World War II: Crispolti proposed a concrete alternative to the exhibitions in the Venice Biennale proposing an original idea of exhibition based both on critical and methodological structures, which saw also the noteworthy presence of architects such as Paolo Portoghesi.

These were critical essay exhibitions which, due to this original approach, prompted a heated debate among art historians and critics. The critical intent was to return the variety of artistic research in progress (Surrealism, Informal, New Figuration, Abstraction, Pop Art) rather than to promote a single trend,

Giuseppe Di Natale explains: “The purpose of the conference is twofold: on one hand, to reflect on the socio-cultural context of the 1960s, when in L’Aquila, for the first time in Italy, it was proposed a concept of exhibition alternative to those in vogue after the war and well represented by the Salon and Premio exhibitions. This new concept of critical essay exhibition generated a heated debate among historians and art critics. On the other hand, to reflect on the critical and methodological reasons that led Crispolti to choose the artists and works to be exhibited. The critical objective, in fact, was not to promote one trend over another,. 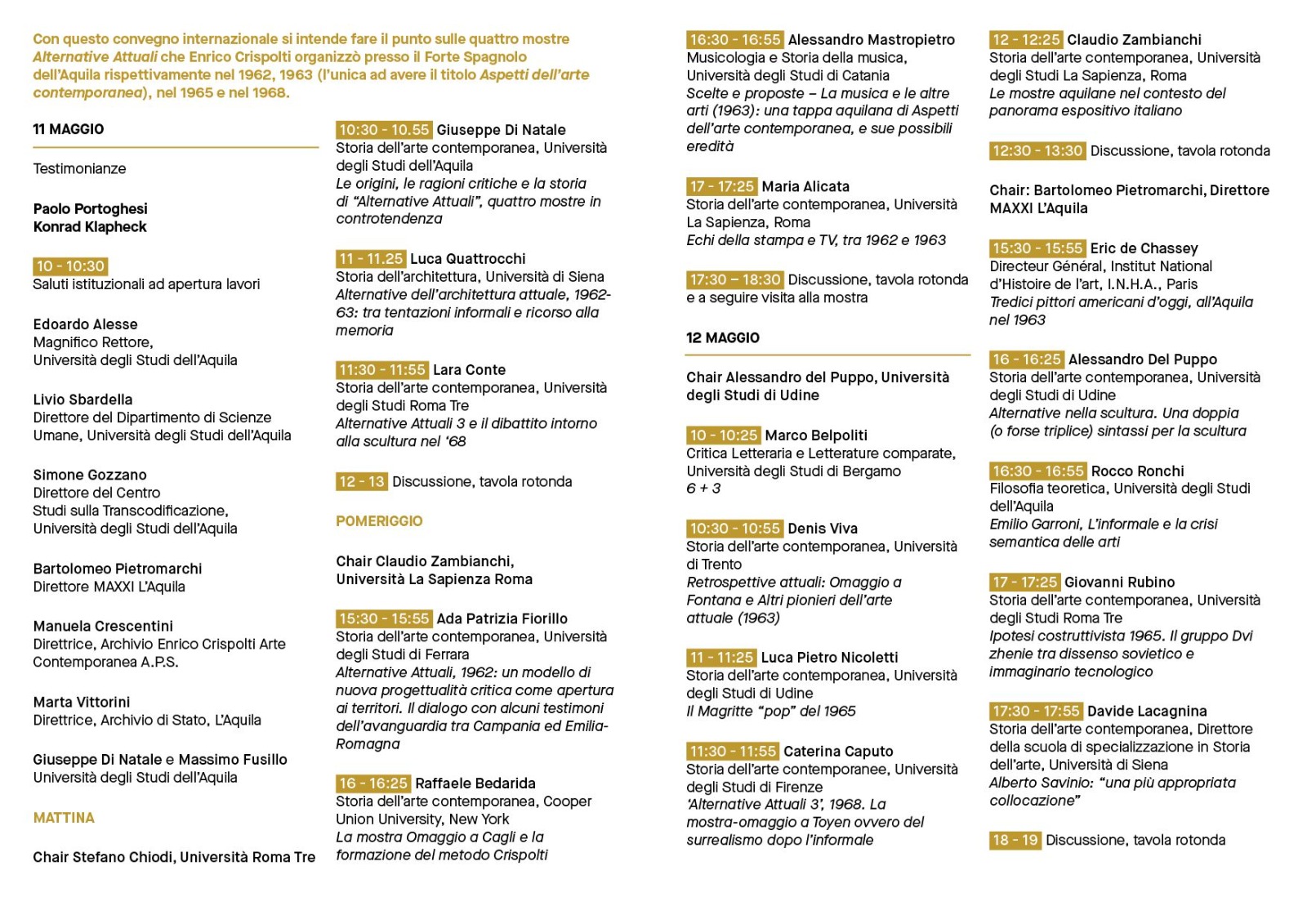 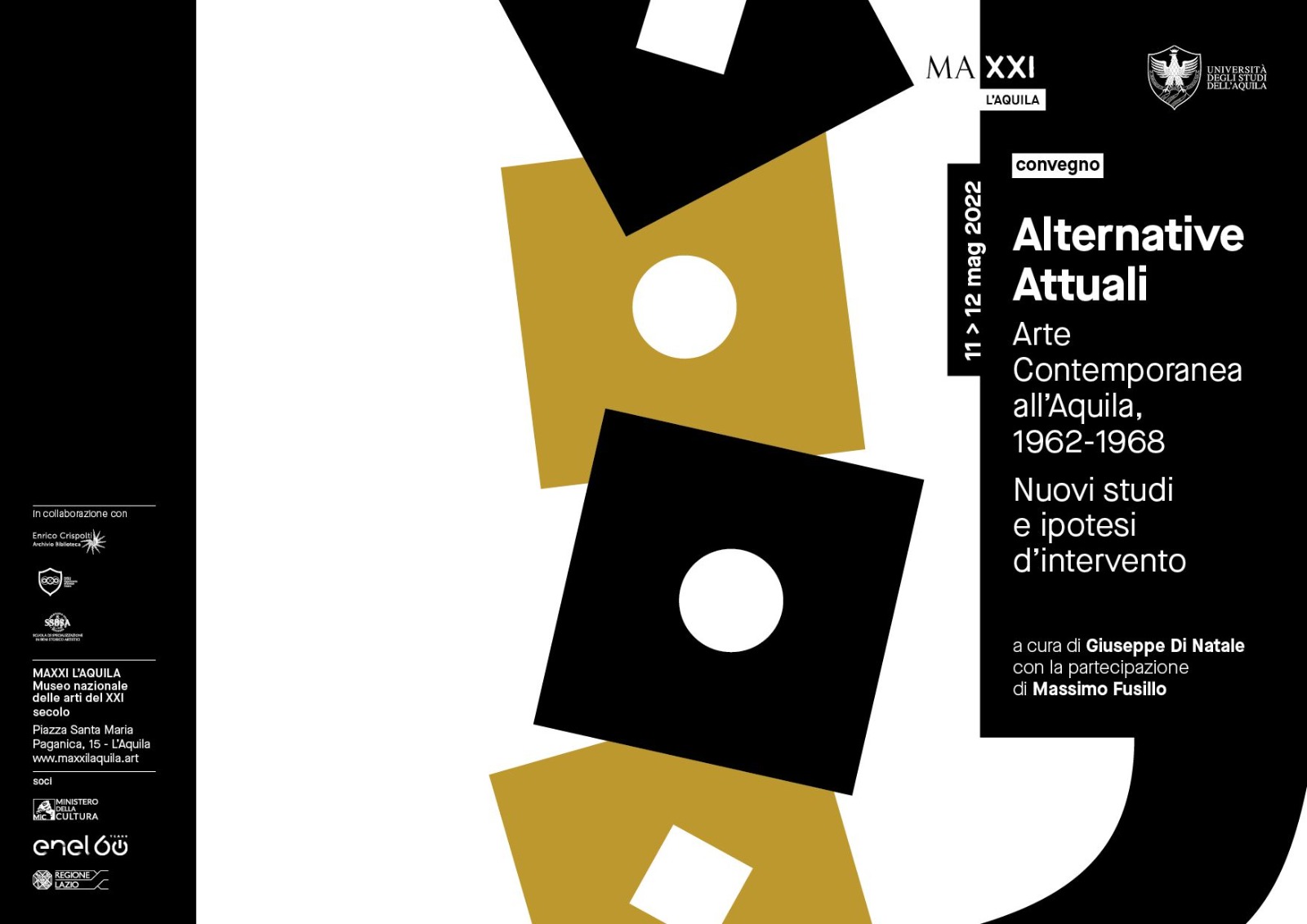 This website uses cookies to improve your experience while you navigate through the website. Out of these cookies, the cookies that are categorized as necessary are stored on your browser as they are essential for the working of basic functionalities of the website. We also use third-party cookies that help us analyze and understand how you use this website. These cookies will be stored in your browser only with your consent. You also have the option to opt-out of these cookies. But opting out of some of these cookies may have an effect on your browsing experience.
Necessary Always Enabled
Necessary cookies are absolutely essential for the website to function properly. This category only includes cookies that ensures basic functionalities and security features of the website. These cookies do not store any personal information.
Non-necessary
Any cookies that may not be particularly necessary for the website to function and is used specifically to collect user personal data via analytics, ads, other embedded contents are termed as non-necessary cookies. It is mandatory to procure user consent prior to running these cookies on your website.
SAVE & ACCEPT
WordPress Lightbox